Forgot to post this on Friday. This was the dress I bought 6 weeks ago (aka pre-breakup) to wear to Wiley’s brother wedding. I put the dress on Friday night to see how much better it fit now and to see just good I would have looked in it. I hope I have an occasion to wear it soon.

Being back in NOLA is awesome. Ran 3.1 miles along the Riverwalk this morning.

Between staying late at work, the drizzling rain, and how dark it was getting yesterday I put off my 10 miles until today. I’m glad I did because the weather was PERFECT. 10 miles in 1:57ish 11:46 pace.

Do I run after work in the rain or get up early and run tomorrow when it’s supposed to be sunny before I drive to NOLA?

AND – Does anyone have good suggestions/tips for running in the rain (namely how to not mess up my ipod)?

Thanks for the responses. I AM going to run this afternoon. I know I would run tomorrow if I held off – but I don’t want to be exhausted before driving and then being in NOLA for a few days. I rather run tonight and SLEEP. I have an armband with a case, but I guess I’m just HELLA poor these days and I’ve have nightmares about EVERYTHING I own breaking/malfunctioning and my ipod is something I NEED. I looks like the rain is expected to roll in a bit later, but I’ll bring a plastic bag just incases (NAME THAT MOVIE).

Came across this, this morning. I liked it, but in my current situation this version is more fitting “I may not have gone where I intended to go, but I think I will end up where I need to be.”

I have a 10 miler scheduled. I wanted to run it tonight since I’m leaving for (and driving) to New Orleans tomorrow at noon. However it’s supposed to rain this afternoon. I rarely run in rain and haven’t ever run such a long distance in the rain before.

Do I run after work in the rain or get up early and run tomorrow when it’s supposed to be sunny before I drive to NOLA?

AND – Does anyone have good suggestions/tips for running in the rain (namely how to not mess up my ipod)?

I started keeping a list of songs for a playlist for the LA Marathon. However I titled the playlist LA Marathon Half without really thinking about it. I’m so used to writing half marathon (because they are the only ones I’ve run) that it’s crazy for me to just write marathon. Knowing that in a few short months I will be a legit marathoner.

One of my friends tweeted about doing Sock Bun Curls yesterday. I had no idea what she was talking about so I googled and found some tutorials:

I thought what the heck let’s try and I wound up with some AWESOME curls. I have naturally wavy hair to begin with which helps. Regardless it was SO easy. I look forward to playing around with some variations! Like trying it with slight damp hair instead of dry hair with some curling spray (made my hair a tad bit crunchy). Oh or like 2 baby buns. Gah this will be even better the longer my hair gets!

To make this fitness related…it helps to have some “go to” hair plans when you don’t want to wash your hair everyday despite working out. I often wear my hair wavy/curly, because I hate straightening it just to put it in a pony tail to run. However my curly hair involves washing it which isn’t good for my hair if I wash it daily. So I can use this sock bun trick to save on some washes.

From 234 pounds to the Miss America pageant

(CNN) – Every Friday, Bree Boyce dreaded her high school gym class. Students had to run a mile under 11 minutes, and those who couldn’t finish in time would have to walk around the track for the rest of the period.

Weighing 234 pounds, Boyce never made it in time.

“There were a few times I tried to run because I was so embarrassed and afraid of what other kids might say. After many failed attempts, I gave up hope,” said Boyce.

Every day, Boyce wore a baggy T-shirt and a pair of faded, size 18 jeans to school. She ducked and dodged anytime someone tried to take her picture. She deflected attention from her weight by cracking jokes.

She struts onstage in body-hugging evening gowns and swimsuits. She embraces the spotlight as the reigning Miss South Carolina. And she has been a guest co-host on “The View,” chatting openly about her weight.

Bree Boyce: Applying weight-loss lessons to all of life

“I had struggled for so many years with my weight,” Boyce said. “So many girls look to beauty queens because they want to be like them and look like them. But my thing is that we’re all unique and we’re all different and not one person is going to look like the next. And somebody might be a healthy size 6, and an unhealthy size 0.”

When she makes public appearances, a tiara rests on her head and a sash drapes over her shoulder. She’ll compete for the Miss America crown in January in Las Vegas.

Her journey from obese teenager to beauty queen isn’t just about shedding excess weight, or going from one extreme to another.

“It’s more about setting a good example for the younger generation,” Boyce said. “If you have a dream, go for it. Don’t let others’ perceptions hold you back.” 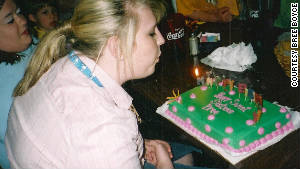 Growing up, Boyce was chubbier than her three older siblings. Although she ate about the same foods as they did, her metabolism seemed different. As the youngest of two girls and two boys, Boyce found support and acceptance in her family and community. 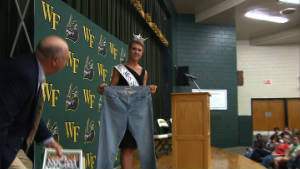 Bree Boyce, who is Miss South Carolina holds a pair of size 18 jeans she wore in high school.

“She was the funny kid,” said Tiffany Olson, Boyce’s older sister. “She had the best personality.”

Her personality carried over to school, where she won over friends with her enthusiasm (she was president of the pep club), and impersonations of celebrities from Cher to Britney Spears.

“I tried to be very outgoing and tried to compensate my weight with my personality,” Boyce said.

When people at school talked about her or teased her, she’d try to be their friend.

“Sometimes I made fun of myself with them,” Boyce said. “It was all trying to cover up and not try to expose myself too much that I was hurting inside about my weight.”

Throughout her childhood, Boyce watched on the sidelines as her older sister competed in beauty pageants. She secretly hoped one day, she would compete.

As a teen, Boyce tried several weight-loss gimmicks, low-carb and starvation diets. But she’d always slip back into her old habits because the hunger returned with such intensity.

Boyce’s health battle is not rare in her home state. In South Carolina, about 31% of the population is considered obese.

“I figured that this was the body I was going to live in, and there was nothing I could do about it,” Boyce said. “I was just so unhappy about the way I looked, but I still continued to eat unhealthy.”

“I would come home from school, sit on the couch for hours, and snack all day long. I would drive to a fast food place, pick up any meal I wanted to, eat it and then go back an hour later, eat it again.”

At age 17, she went to the doctor’s office because of knee problems.

The doctor didn’t mince his words. “You know, this weight has to come off,” he told her. “And if it doesn’t, then your body is not going to take care of you in the long run. And you’re only 17 years old.” 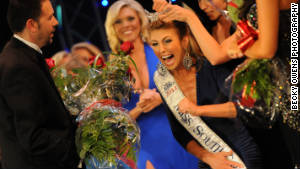 Bree Boyce was crowned Miss South Carolina on July 2. The Miss America Pageant will be January 14, 2012.

Boyce realized that he was right.

Surgery is no quick fix for obese teens

She tossed out junk food and set a goal to lose five pounds in one month. And she put one foot in front of the other. She walked around the block because “that’s all I could do. I was so overweight.”

Then the next week, she walked a little farther. After her first month, she lost seven pounds.

When you’re losing weight, where does the fat go?

After losing more pounds, she joined the gym, started dancing in Zumba classes. Then she started jogging.

During her senior year of high school, an adviser at the pep club suggested Boyce try for the title of Miss West Florence, the school’s equivalent of a beauty pageant. At first, Boyce laughed it off.

“I was not thin,” she said. “I was still chubby, losing weight gradually.”

But Boyce gave it a shot.

“I was myself and I won,” beating 38 other girls, she said. “That gave me another confidence boost knowing that I could do what I set my mind to.”

After graduating in 2007, she went to study theater at Francis Marion University. She competed for the local Miss Florence title and began a winning streak in local beauty pageants until she finally won the state crown in July.

Through the years, Boyce had to unlearn a lifetime of bad habits.

“It’s all about learning a process, learning a lifestyle, and so many people think it’s an overnight quick fix. And it absolutely is not. It takes time. It took me three years,” she said.

Boyce, who couldn’t finish a mile in under 11 minutes in high school, can now run that distance in seven minutes. She plans to train for her first marathon once she has time after the Miss America contest.

“You don’t have to be rail thin to think you’re beautiful and want to be Miss America,” she said. “You need to be happy and content with yourself, get your physical activity. That’s what counts the most – not starvation diets and being rail thin.”

Boyce meticulously schedules workouts and meals to prepare for Miss America. On a recent day, she cooked breakfast at home in Florence, scrambling eggs and slicing a grapefruit.

In the pageant world, where a woman’s frame and figure are constantly analyzed, Boyce has heard the critiques: too muscular, too big, not petite enough, not a size 00.

“I love my body,” Boyce said. “I went from 234 pounds to being comfortable and happy and being content with the way I look. Someone says I’m not a 00 – that doesn’t mean I don’t continue to compete for Miss America. We need to give an idealistic role model.”

She said she’d rather be on stage looking the way she does now than looking “sick, frail and thin. That’s not the message that I’m promoting at all.”

My last few WIWs didn’t happen because I forgot or didn’t want to know due to what I ate the night before. However I’m thrilled to be where I am. In the 11 weeks since I “rebooted” my weight loss I’ve lost about 11 pounds! BOOM. I actually even saw the 183s this past weekend, but getting my period on Monday has made me el bloto!

My spin class streak is over.

I’ve gone to spin for 7 straight weeks, but next week I will be New Orleans.

I am so glad I got into spinning last year and it’s been great. I love both of the instructors and they puuuuuush me. I will be back in 2 weeks for sure!